Missing Her by J. L. Willow 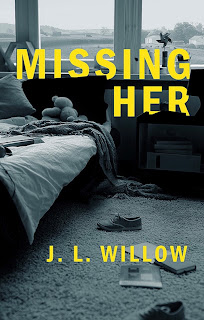 Let's start with the characters:

Very first on the list is Vanessa Stockton. Vanessa was an interesting character, to say the least. I think she handles her situation in a very real way. Not to give too much away, she does what a reasonable person would have done. I think even though she is in other minds I could still get a feel for who she is. One thing about this character that I'm not so sure about is her character arc. I think she does go through one but I'm not sure what it is exactly.

Next up is Vanessa's best friend Eliza Barrows. Eliza was a good character. As we went through her life from Vanessa's point of view, I could get the feel for her normal life and her personality. She is a normal female teenager. She has a boyfriend. She had things she likes to do. I could feel the amount of friendship Vanessa and she had as Vanessa was able to live as her pretty well, knowing her schedule and how she would react in a situation. When we got to see Eliza her characteristics came off well and not forced.

Later in the novel, you meet Tony and Jacqueline. These two twins are the very definition of siblings. I could feel the relationship very well in the short amount of time we got wit the two. I could feel myself smile and laugh along as they did think my siblings and I do. For their personalities, they came off as college students with two different lives. One was the typical lazy boy out of high school living with his parents and the other was a girl who got good grades and was still holding on to part of high school. The two did their parts well and I connected with them well.

Overall, these characters were good. I connected with them for the most part and my favorite character has to be Vanessa and not only because she is the main character. I felt the most like her. We knew what she felt and while there were good scenes with the other three, I loved when her personality would come across in the other's lives.

If there is the only thing I have to like, it's plot. The plot, to me, is the most think in a book. Sure, boring characters can ruin a book but who wasn't an interesting character's in a boring situation where they don't get to do much? Hint, not me. As for the plot of this novel, I really enjoyed it. Like I said many times over on Instagram and Twitter, this book was almost nothing like I thought it would be. It took a different turn than I thought it would and it had me guessing on what was going to happen next.

The best part for me was the way Willow wrote Vanessa in each mind. I wasn't sure how you could make a story based on that but she did in a way that keeps me reading. Once I was able to get past the first about 50 pages I could barely put this book down. I enjoyed each moment and I was emotionally invested in this one. My heart would race along with the characters and would I would cry with them.

At the end, with the climax, I was left breathless wanting more. I flipped to the last page and wanted another 100. This book was a nice fast read and I'm very grateful to Willow for gifting me with an ARC of her amazing second novel.

I'll touch on one more part I think was important as well, Willow's writing:

The writing of this novel was good, maybe even more than that. I loved how I was able to follow along and get into her characters. I felt in the situation with them and this is a hard thing for me to do. As a person who is very emotional but also very emotional distance when it comes to people, I love when a book is able to suck em up like this one did.

I will thank Willow one more time for this story. The connects I was able to build was something I will not forget and this book was able to get me out fo read slump that I was dragging myself through.

I can't wait to read more by you, maybe even The Scavenger can be next. Who knows?

I recommend this book to anyone who is looking for a quick read and who likes to solve mysteries. I would recommend this novel to about four of my friends so I would say it's a safe bet that it's good.